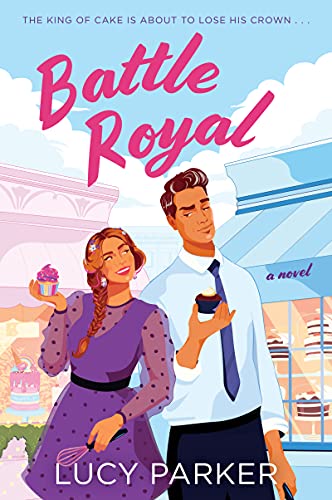 Sylvie Fairchild and Dominic De Vere first met on a television cooking competition. No they weren’t both competing, Sylvie was, but Dominic was one of the judges. They loathed each other at first sight. When Sylvie opens up her bakery right across the street from Dominic’s they can’t help but be competitive, each striving to win the next big account. When Sylvie gets cast as one of the judges on the same cooking show where she met Dominic its the first time she see’s more than a few minutes of him. When the palace announces a royal engagement they end up working together to unravel a mystery. The more time Sylvie and Dominic spend together they see another surprising side to the person he/she thought they knew.

Full disclosure! I am a HUGE fan of both Lucy Parker and the British Baking Championship which their show is based off of, so I knew going in that I was going to either hate this novel or LOVE it. Lucy Parker’s writing chops wins again and I ended up falling for both of these characters. Battle Royal was “brilliant” as the British say, but it was also a ton of fun.

Sylvie Fairchild is all glitter, sparkles, and colors, and Dominic is staid, neutral, and elegant. Who would have thought that the two of them would strike a match? When they start researching a mystery about the royal house, they get glimpses of something in the other that strikes a chord in what they’ve missed through their entire lives. I really liked these two as a couple and even though they had a long journey it was totally worth the happy ending.

This novel had all of the fun themes of a fast paced story. A competition, evil characters, a historical mystery, and the behind the scenes drama of a baking show. A lot of characters had emotional journeys, not just our two main protagonists, and I really got involved in every sub plot. This novel was so much fun.

If you haven’t read Lucy Parker’s London Celebrities series, please check them out. I think I read each one a few times over the last year because they made me feel good when I needed that jolt of happiness. Battle Royal is my newest addiction and you can bet I’ll be getting a copy in every format.

I received a copy of this ARC through NetGalley and the publisher for my honest review and it was honest!

Click this link to purchase!* Battle Royal: A Novel

2 thoughts on “This Chick Read: Battle Royal by Lucy Parker”