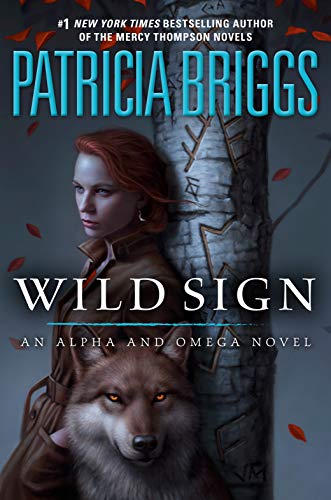 When a “camp town” goes missing in the woods of northern California the FBI delivers the news to the owner of that land, the Marrock’s pack. That land is tied to the origin story of Bran and Leah and that story has always been shrouded in mystery. Bran sends his enforcer and son, Charles, and his mate Anna to investigate, warning them that there is something mystical in those mountains. When they arrive they find that the camp was empty with no signs of struggle but some mysterious carvings lead them to believe that magic was involved in their disappearance.

I have waited a while (3 years!) for another Alpha and Omega novel as Charles and Anna are one of my favorite paranormal couples. Each novel in this series reveals more about this pair that intrigues me and keeps me wanting to find out more. Burn Bright, the last novel in the series, centered around its own mystery but as they were investigating that mystery Anna became more determined to find a way to have a child. As a female werewolf carrying a baby to term wasn’t possible and at the beginning of Wild Sign we find out that Anna and Charles are exploring adoption and Anna is frustrated at the length of the waiting list. This storyline has me looking differently at Anna and Charles individually, or more aptly, as a couple. Anna, as an Omega has a nurturing personality unless she’s backed into a corner, but mostly she’s a peacekeeper and it’s easy to see her as a mother. It’s Charles evolution that is the most interesting to me. As the pack’s enforcer Charles must wade in where others fear to go, often being called upon to kill wolves who may cause danger to their packs or society in general. This conflicts with the thought of Charles as a father, however, through Anna we see Charles the nurturer. Through their relationship he’s had to be very calm and patient with his mate creating a sense of safety for her after her abuse at the hands of her previous pack. As time has passed, now into book #6, we see Charles in a different manner. He’s still the enforcer and is called upon to do the difficult things that need carrying out, but he is also a man who wants to be loved, who wants to nurture, who wants his own family. I love this contrast in his character because it creates so much more meaning when he does react to situations, laying aside that man and giving over to his wolf who is the darker side of himself. Why do I bring all of this up? This theme continues in Wild Sign and becomes a defining factor in the mystery they are trying to solve.

OK, let’s talk about the mystery. Yes, there is a big bad magical being in the woods. One that has been there for eons capturing and captivating the people who happen upon it. Without giving away the details of the book I think I can say that this being is part of the legends of that area and as with most legends you don’t truly believe, the locals also make sure to stay away. So, why did the people of this missing town set up right in the midst of it’s territory? As with any story of this nature, it was hubris.

I like the balance of puzzling out the investigation with the powerful moments of outsmarting the baddies with smarts and brute strength. As with any story involving werewolves, there is a lot of action in this novel, but sometimes the more meaningful moments are when the story is quiet and they are deliberating through the facts. Those quiet moments of reflection often more their characters forward in their own story. As we are in book six if they aren’t moving forward in their relationship I think I would be let down and that’s something Patricia Briggs has not done so far in this series.

Wild Sign was as good as the cover makes it look. Seriously, what a fabulous cover! We find out a lot about some characters who have been a bit of a mystery which was fun, and that ending? Wow, Ms. Briggs, please don’t wait another three years for the next installment in this series. I don’t think I can wait that long! ❤️❤️❤️❤️❤️

I received a copy of this book from through NetGalley and the publisher for my honest review and it was honest!

One thought on “This Chick Read: Wild Sign (Alpha & Omega #6) by Patricia Briggs”