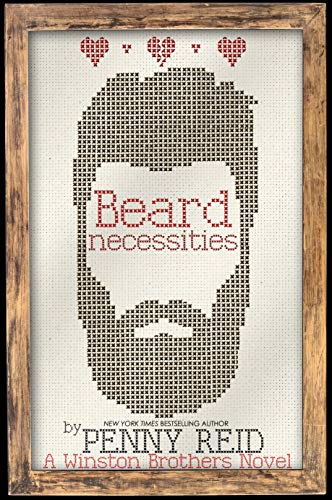 Scarlet St. Claire has spent her whole life flying under the radar from her father and the kids at school. While doing exactly that, camping out in the woods behind the Winstons home, she comes to the attention of none other than Billy Winston, the boy that Scarlet has hated her whole life. What she doesn’t realize is that this boy that’s she’s run from may actually be the answer to her salvation. Beard with Me is the story of Scarlet and Billy, love found and love lost.

To say that I had been eagerly anticipating this novel would be an understatement. However, when the author, Penny Reid put out a statement saying that some people may not be happy with this story I paused on reading it. What did she mean people might not be happy? I hate second guessing my reading choices, so I waited until the follow up came out to read both novels back to back. Hence my late review.

Scarlet St. Claire is the daughter of Razor, the head of the local motorcycle club, and the bane of her existence. He is one seriously bad hombre and for some reason he is fixated on Scarlet, so she tries to remain as scarce as possible. This is tough for a 14 year old girl, and occasionally when she needs money she has to bite the bullet and deal with dear old dad. After one such incident Billy stumbles upon her campsite behind his house as she’s singing very loudly with headphones on. Captivated he decides to help her instead of reject her as he’s done numerous times before. Never having been helped by anyone who didn’t want something in return, Scarlet tentatively accepts his help and through those moments she and Billy fall madly in love.

This is not a light hearted Penny Reid novel, so now I kind of understand why some people may have rejected Beard With Me at first. I think if I didn’t have Beard Necessities to immediately read at the end of this novel, I would’ve had a hard time bearing the burden of this ending. It was a perfect set up for the next piece of their story.

Beard Necessities is the story of Billy and Claire (aka Scarlet). Misunderstandings, miscommunications, and broken hearts have kept these two apart for almost 20 years. I know what you’re thinking. Claire? Yes, Claire! She has been in almost every single one of the Winston’s novels. The reader knew there was some kind of back story between she and Billy because it was hinted at and in this novel we finally are told the whole story.

This novel takes place in Tuscany where the whole family is together. Unbeknownst to Billy and Claire, their lives are about to be managed. Thrown together at every circumstance (some of them are quite clever and funny) Billy and Claire finally overcome their bitterness and mistrust and dare to dream that they could find their happily every after.

Beard Necessities when paired with Beard With Me is the epitomy of a knockout punch. We are given the heart break of the first novel and see them struggle so much with all of their past beliefs about each other. Most of which were complete misunderstandings. Billy, when he finally realizes he has a chance to be with Claire/Scarlet is so tender. I think this story must be the most tender and beautiful of all the books in this series. Maybe it’s because I got so invested in these characters? I don’t know, but Penny Reid deserves an award for how full of love these characters are for each other. It was sad and beautiful all at once.

I believe this author said in that note I was talking about before that if you can’t handle it you can skip Beard with Me and just read Beard Necessities. I hope I got that message wrong because I think you really need to read Beard With Me first so you can feel as much heart ache as these characters do so you can be fully invested in their happily ever after in Beard Necessities. Without that first story, I think BN might have felt a little flat. Anyway, I’m glad I read them the way I did so I can only say to you how effective it was and how much I adored the conclusion to their story.