I know, it’s already almost mid February and I’m a little late with my wrap up post. 2018 finished with me sick as a dog and 2019 began with that same damn cold. So, after finally being healthy for a few weeks I’m just getting back into my regular posting. Thank goodness for scheduling a few out in advance! So, here I am ready to talk about what happened on my blog in January. First Up!

‘This is a very sexy slow burn novel. Kimber and Matteo’s chemistry is off the charts but because they are adversaries it’s set on a slow simmer through most of the book. I’ll admit that I love slow burn stories and love the engagement of the characters leading up to the big moment usually more than that big sex scene. Although in this book, that also was pretty great. ‘

Song of the Current by Sarah Tolcser

‘I love YA action novels and Song of the Current hit the right note for me. It did start off a little slow but that was to be expected as the characters and world building needed explanation. As soon as she pushed off down the river and opened that crate the story took off and the adventure began. ‘

Ignite the Stars by Maura Milan

‘I love a fast moving plot and Ignite the Stars was quick, emotional, and fun. It’s hard to believe this was Maura Milan’s debut novel. It seemed like every character had their own hidden battle they were fighting. I’ll admit that Brinn was probably my favorite character, but Ia was a close second. They were both underdogs, and I do like to root for the underdog. ‘

What Doesn’t Kill Her by Christina Dodd

‘What Doesn’t Kill Her was even better than Dead Girl Running, and I loved that novel! There was some great dialog between Rae and Kellen that provided comic relief to what would’ve been a non stop action novel. Those moments of warmth between mother and daughter allowed the reader to build a deeper connection with Kellen, and I cared even more when she and Max reunited as a couple. ‘

We met a couple of great book bloggers on my Blogger to Blogger series last month. If you didn’t have a chance to hear how they answered my 10 questions please click the link below.

Even though I was under the weather for the first couple of weeks of January, I did try to rebound with a couple of posts on my Sunday series.

I think I missed the mark with the first as I was trying to get my fellow bloggers to tell me what question they were dying to ask J. K. Rowling. I only got a couple of responses. Maybe not that interesting? Who knows! If you want to take another shot at it, please click on the link below.

If We Could Ask J, K. Rowling One Question…

My other post was a little more interesting and talked about YA trends and how even when they are hated, I kind of still like them… Feel free to read and still join in the discussion!

YA Trends (and tropes!) Let me Count Thy Ways…

Who are we kidding, eliminate it? Nah! However, there are a few book that I’m hoping to read in February. Let me tell you about a couple!

Circle of the Moon (Soulwood #4) by Faith Hunter

Synopsis: Nell can draw magic from the land around her, and lately she’s been using it to help the Psy-Law Enforcement Division, which solves paranormal crimes. Joining the team at PsyLED has allowed her to learn more about her powers and the world she always shunned–and to find true friends.

Head agent Rick LaFleur shifts into a panther when the moon calls him, but this time, something has gone wrong. Rick calls Nell from a riverbank–he’s naked, with no memory of how he came to be there, and there’s a dead black cat, sacrificed in a witch circle and killed by black magic, lying next to him.

Then more animals turn up dead, and team rushes to investigate. A blood-witch is out to kill. But when it seems as if their leader is involved in the crime, the bonds that hold the team together could shatter at any moment.

On the Come Up by Angie Thomas

Sixteen-year-old Bri wants to be one of the greatest rappers of all time. Or at least win her first battle. As the daughter of an underground hip hop legend who died right before he hit big, Bri’s got massive shoes to fill.

But it’s hard to get your come up when you’re labeled a hoodlum at school, and your fridge at home is empty after your mom loses her job. So Bri pours her anger and frustration into her first song, which goes viral…for all the wrong reasons.

Bri soon finds herself at the center of a controversy, portrayed by the media as more menace than MC. But with an eviction notice staring her family down, Bri doesn’t just want to make it—she has to. Even if it means becoming the very thing the public has made her out to be.

Insightful, unflinching, and full of heart, On the Come Up is an ode to hip hop from one of the most influential literary voices of a generation. It is the story of fighting for your dreams, even as the odds are stacked against you; and about how, especially for young black people, freedom of speech isn’t always free.

Oh gosh, there are so many more!

What books are you looking forward to reading this month?

4 thoughts on “This Chicks Sunday Commentary: January ’19 Wrap Up!” 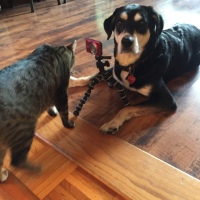