A few weeks ago I received a text from my sister saying that she’d put us on a waiting list for an exclusive meet and greet with Mariana Zapata at the Inn Boonsboro in Maryland.  Someone had dropped out and there was one room available. Did I want to take a few days off from work and go? I had just finished Mariana Zapata’s newest novel From Lukov With Love and loved it so I really didn’t have to think that hard. Umm, yeah!  Let’s do it!  This was a twofer! To get the chance to meet with one of my favorite authors and also stay in Nora Roberts Inn Boonsboro? What a treat!

The Inn Boonsboro is only a little over an hour’s drive from Baltimore, the airport we flew into. On our arrival, we were given a tour of the Inn. A small library filled with bookshelves full of fiction and a couple of arm chairs in front of a fireplace was right around the corner from our room. I knew I was going to be making myself comfortable as there was also a Keurig in the corner where I could make coffee, tea or hot chocolate while looking at all the books on the shelves. There was also a small dining room, with delicious cookies on display, as well as a parlor where we were told our book event with Ms. Zapata would be taking place in another hour. When we were led to our room, we passed themed rooms with plaques identifying which romantic couple that room’s theme portrayed. My sister and I were placed in Eve and Roarke! As a huge fan of J. D. Robb’s In Death series I was thrilled at the decor, a mix of modern and historical pieces really gave it a unique vibe. The picture below shows the outside of the Inn that evening and our room before we totally wrecked the space with our stuff.

I noticed on the desk in the corner a notebook and curious, I opened it up. It was for guests to sign the page and to write their thoughts about their stay in that room. Look who wrote in the first page! 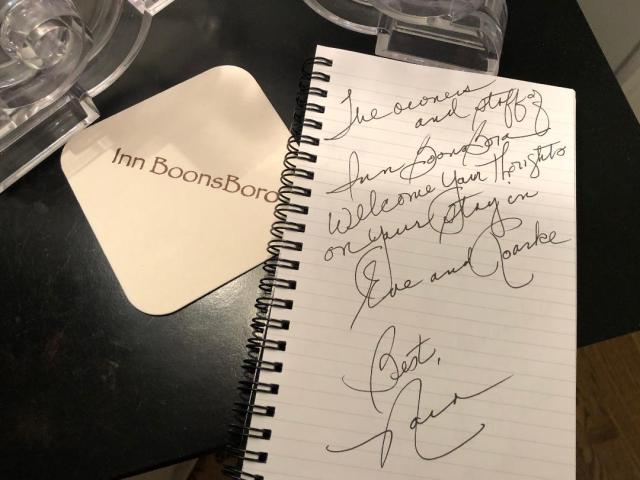 Later that evening I peeked into a couple of the other rooms and took quick photo’s, just so you could see how the themes were so different from each other and really lovely! They spared no expense in the creation of this Inn.

To see more details about the Inn Boonsboro as well as their upcoming author events titled A Novel Adventure please click on this link to go to their website. Inn Boonsboro

Next up is YA author Cambria Hebert on 6/18. If you live in the area or are a short plane ride away, I really recommend this experience!

Mariana Zapata is the author of multiple best selling novels such as Wait For It, Kulti, The Wall of Winnipeg and Me, etc.

At 5pm we were told to gather in the parlor for a two hour cocktail and conversation with Mariana Zapata. I brought my copy of Kulti and my sister had her copy of From Lukov with Love and we entered the parlor, not really sure what to expect. There were drinks, appetizers and a few desserts and only a few people. We saw Michelle, one of the Innkeeper’s and asked her how many people she expected and she said 13 in total. My sister and I looked at each other in shock. Wow! This really was exclusive! Mariana and her assistant Eva were the last two to arrive and the rest of us ladies were seated in chairs around the room.

My first thought was how Mariana was so sweet and young! She was small in stature, but she was outgoing, waving at everyone and asking how we were all doing. She had a purple (kind of orchid in color) rinse on her hair and started up conversation with the people on that end of the room. We were told that she’d sign our novels first and then we’d spend the rest of the time asking questions and she’d answer them willingly. As she signed our books she chatted briefly about where we were from and really I think I talked more about myself, forgetting to ask her any questions! LOL. My sister and I asked if we could have our photo taken, see below! 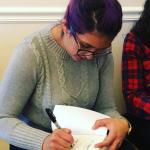 and naturally started answering our questions. I will admit, I did not take notes, however my sister helped me recreate the questions and conversations and I will try to be as detailed as possible without too much embellishment. (Please take note, this is not a verbatim conversation.)

We also talked about the popularity of Alpha Males in some other authors books. She said she liked an Alpha Male but didn’t want to always write about one. It was really important for her to have each of the men in her novels be different from each other.They were all strong characters, but individual as well.

Q: Why didn’t people react well to her novel Dear Aaron? (If you haven’t read Dear Aaron most of the book is told by letters or emails between the two main characters, Ruby and Aaron). She thought it was because Ruby was not as in your face as Sal from Kulti and Diana from Wait For It. Ruby had her own strength but it was quieter. She still grew as a character, but for some reason readers just didn’t connect as much, she didn’t really understand it.

Q: I bet you hear this all of the time but I have to ask about the Toolbox in Wait For It. Why didn’t you ever resolve that part of the story in the book? Mariana seemed a little confused. She said she felt like she had resolved Dallas’s reaction. (The toolbox was her dead brother Rodrigo’s and her friend Vanessa painted it pink with flowers on it.) She said Dallas was upset when he saw the toolbox because he felt she should have someone who could fix things for her, but he wasn’t in the place where he could be that man for her, yet.

Q: When did Ivan and Jasmine in From Lukov with Love actually fall in love? Mariana actually never answered this question. She said she likes her readers to get what they need from a novel and she doesn’t like to spell things out for them. I mentioned to her that I felt like they fell in love after they became skating partners, but that my sister felt like Ivan had always loved Jasmine and was just waiting for his chance. It’s interesting how reading is so subjective and we can all get something different out of reading the same book. She nodded, seeming pleased at our reactions.

Q: Do you have a writing schedule? She said that yes, she does, but she learned pretty early on that she had to make sure she had a life. Make time to make dinner and eat with her husband, work out, etc. When asked about her next book, she didn’t give a whole lot of details other than that she liked to alternate between fun and serious books. She said Dear Aaron was a fun book, although people didn’t seem to agree. My sister and I tried to map out her books and we think it’s one funny to two serious? If that’s the case, the next one may be a serious novel because Lukov was serious.

Q: How did you start writing slow burn novels? She said that she finds the relationship much more interesting than the sex. If she reads a novel where the characters jump into bed too soon she ends up skimming those scenes and loses interest a bit. How they get to that point is so much more interesting isn’t it?

There were so many other topics of conversation but you can see from the above conversations that they ran the gamut of all of her novels as well as a little bit about her writing habits. She was charming and entertaining and very honest. This was an experience that I won’t forget and will hopefully be able to have again. I’ll be keeping an eye on the Inn Boonsboro’s website for future guests! Here is a group photo- you can see how small the group was!

Oh, one last thing! Did I mention that Nora Roberts lives close by and her husband owns Turn The Page Bookstore across from the Inn? Here are a few photo’s of the bookstore and the Nora Roberts/JD Robb room inside.

This was a fun one!

4 thoughts on “This Chick’s Sunday Commentary: An Exclusive Book Signing with Mariana Zapata at the Inn Boonsboro”